The Mountainside Marriott is a luxury winter ski and summertime vacation resort, nestled in the Wasatch Mountains, in Park City Utah. Park City is a beautiful historic Utah town located about half an hour east of Salt Lake City. Early pioneers and settlers traveled through this region on the Mormon Trail, and in the early 1880’s large beds of precious metals were discovered in the area and the mining boom began. Much of the area’s soil has been affected by early silver mining activity and much of the Mountainside Marriott resort had been built on old mine tailings.

Concrete Stabilization Technologies, Inc. was contacted by the Park City Mountainside Marriott’s Chief Engineer, Dave Martin in November of 2013 concerning the resort’s pool and hot tub area that had suffered significant settlement, posing trip hazards and unsafe conditions for its many visitors. Mr. Martin and CST Field Consultant, Scott Paswaters, had known each other through a prior work relationship at the Zermatt Resort in Midway, Utah. CST had completed a similar project there in 2012.

Dynamic Cone Penetrometer testing was proposed to accurately determine soil conditions in the settled areas. An estimate for repair was given based on the findings of the DCP tests.
With the 2013 Winter Ski season gearing up, the resort decided it would be best to wait and begin repairs in the spring of 2014.

Follow up on the project was made in February of 2014 and the work was coordinated with other contractors involved in additional remodeling in the pool area. Logistics of getting to the pool area with equipment was discussed and a plan devised to access the area from the south end of the pool, leading to the plaza with a run of approximately 300 feet of injection hose into the pool area.

Heat coils in the deck slabs were located and properly marked in a grid of safe zones using a Ground Penetrating Radar (GPR) system. This helped insure that no coils would be damaged during the injection process. Once the season officially closed in March, the pool was drained during the night and crews began working bright and early the next morning.

Results from the DCP tests showed unstable soil as far as 9 feet below the pool area. Injection of approximately 7,000 pounds of a CST geopolymer was estimated to properly densify and stabilize the soil, as well as realign the overlying slabs and deck areas.

Crews began by mapping out the areas to be treated. A CST geo-polymer was then injected through a pattern of 5/8 inch holes, filling voids beneath the pool & pool stairs, and re-aligning the pool deck and hot tub slab areas. CST crews completed the project in 2 days, which kept other contractors performing projects on their work schedule with no delays. The owners and Engineers of the Mountainside Marriott were very pleased with the results of CST’s precision repairs. 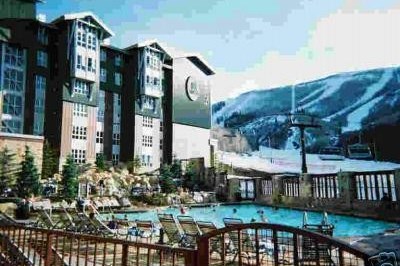