The Church of Jesus Christ of Latter Day Saints Second Ward Meeting House, located in Malta Idaho, had been foundation settlement and movement in portions of the building, resulting in ongoing damage to the structure.

Malta Idaho is a small community located in south central Idaho. Agriculture is one of the main industries in this area. Water being pulled from aquifers for irrigation throughout the area has lowered the water table. With change to the ground water and water table below the surface, pressure areas change and shifting of soil and rock below the surface take place. Sometimes, this occurs at depths very far below the surface.

Engineering reports indicated that settlement and shifting of the soils at a considerable depth, as suspected, were likely the cause of the extensive foundation settlement and sideways movement occurring at the LDS building.

A measuring device which had been installed on the building in early spring of 2014 showed movement of 3 millimeters over a period of 4-5 months.

Test results determined that most of the settlement was not related to the upper 15 feet of soils, lending support to the conclusion that movement was coming from considerable depth.

After a thorough site investigation and analysis of soil tests, CST proposed to employ the CST deep injection method in order to lift and stabilize the building’s foundation both around the perimeter of the building and the load bearing footers and walls on the interior. DCP tests verified soil conditions in order to create an engineered plan to address the weaker zone of soils.

Soils directly below the foundation were dry and ideal for effectively lifting and stabilizing the structure to mitigate future movement and damage.

On May 5, 2015 CST crews arrived on site. A walkthrough was made to identify all crack openings and other damage that had been caused by the settlement and sideways movement of the building. CST’s crew members began drilling injection holes on the exterior of the building near the foundation to identify the spread footer. Probes were then placed on 4 foot centers approximately 3’ to 4’ below the spread footer. Other members of the crew began drilling and preparing interior injection holes and probes and drafting the exterior survey.

On day two, crews prepared equipment to begin injections and starting on the west exterior corner, technicians began injecting structural polymer at set locations. The foundation responded and began moving quickly. Some of the exist-ing cracks began to close at this point. Crews moved back and forth in the west corner section until a total lift of 3 ½ inches was accomplished on the exterior portion of the foundation.

On the final day, crews moved to the interior of the building and complete injections to lift the slab to target elevation.

Result: The load bearing wall was lifted, stabilized and void fill completed in the treated areas. As a result, existing cracks were closed in damaged areas. Movement of the building was greatly arrested and mitigated against further structural damage. All work was completed in three shifts.

Benefit: The CST technologies require no excavation and are performed with very little disturbance or mess. Repairs are made in days, not weeks or months. No need to vacate buildings and treated areas may be used immediately following repairs. 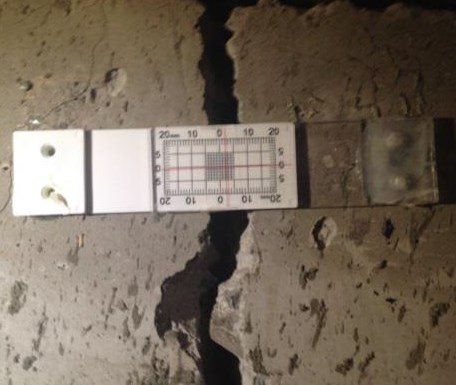