On June 9, 2010, Concrete Stabilization Technologies, Inc. received a call from Moorcroft Wyoming landowner, Ed Scott, concerning an urgent dam repair project near his home. A muskrat had burrowed a hole through an earthen dam and due to heavy rain in the previous days, the water level behind the dam had risen and a significant amount of water was flowing through the burrow at the toe of the dam. When the leak was discovered, it was flowing at such quantity and velocity that it was washing away 50 pound bags of Sackcrete, Mr. Scott had placed upstream to attempt to halt the flow. Once Mr. Scott realized this was doing nothing to stop the flow, he attempted to push dirt into the hole using a rubber tired dozer as well as pack the hole with a soil and bentonite mixture. This slowed the flow down considerably, but did not stop it. If this dam had washed out completely, it would have blocked the primary access to his home.

Ed Scott is an engineer with Consolidated Engineers, Inc., Gillette, WY, who had worked with Concrete Stabilization Technologies, Inc. in the past and knowing about our High Density Polyurethane technology, gave us acall to repair the dam.

On June 10, Mr. Scott met with CST’s crew supervisor Damien Archey and a crew of two men at 9:00 a.m. to investigate the leaking dam site. Prior to meeting, the crew actually had no details on the dam other than it was leaking. When the CST crew arrived at the dam site, they realized they were dealing with an earthen dam, and not a concrete dam. Ed let Damien know that he had attempted to stop the leak by pushing dirt against the hole. The dam was not leaking at the time of this investigation, but the crew could see approximately where the hole had been. The water level was at five feet on the lake, and where the water came out the other side, it was at 25 feet. Damien’s initial thought was to densify the soil from below the hole and collapse the void while strengthening the surrounding area. Probes were put into the soil and wet soil was found at minus five feet with a zone of extremely soft soils. Another area was probed at approximately 20 feet by six feet but results were only found in the first area. Since the water level was at five feet, Damien felt they were in the right spot. Also, this area was in direct alignment with where the water had been leaking out. It was decided to set probes at minus nine feet to start compacting the soil from below the leak. As the crew was injecting, they pulled the probes up in one foot increments while monitoring the surface for movement on the soil. This technique had been used while working with Florida ICR. After shooting at minus 9 feet, probes were set at minus 5 feet and injection was done until they saw soil movement or material at the surface. The crews observed both and when the final probe was shot; the material would not stay in the ground, but came up through fissures in the soil. This indicated that there was no other place for the material to go and the area had been successfully compacted while sealing off the leak. Post soil testing was done and confirmed that it had been successful. Before the start of the work, the standing water at the toe of the dam was clear. After the work started, the water became muddy and two hours after completion, there was no standing water at all at the toe. The next morning, the area was dry. In the weeks following the repair work on this dam, the area again received significant rain fall. As of June 23, 2010, the only water at the toe of the dam appeared to be from the rain. There are no further leaks according to the land owner Ed Scott. The repair used approximately 300 pounds of material and was completed by 11:30 a.m., just 2 ½ hours from start to finish. 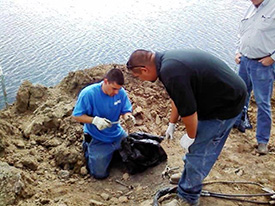