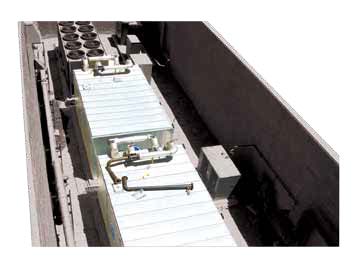 A Denver, Colorado, middle school experienced the effects of expansive soil on a pair of large, 16 ton ice chiller thermal storage units used for numerous school refrigeration needs. Each storage unit was placed on independent, 32,000 lb. reinforced concrete pads to maintain a continuous, even elevation for support and proper unit function. Substantial damage and malfunction to each unit was highly probable if the supporting concrete pad was uneven.

Expansive soils shifted beneath the concrete support pads causing an unsatisfactory level for the chiller units to continue functioning. To avoid damage to the units, both were taken out of service until a repair plan was initiated. The concern for the school district was to have the chiller units functioning at capacity, supported on level concrete pads in time for the upcoming school year.

Due to the cost and downtime for the school and potential hazard of damaging each unit through relocation, a choice was made to use a high-density, polyurethane grouting technique. CST’s Deep Injection Process densifies weak soil zones at specified depths to resupport each pad. This process solved three main concerns:

After elevation profiles were taken, injection locations were determined to stabilize weak soil strata and realign the chiller units. Operators injected at depths of 3 feet at an angle to allow greater material coverage for maximum unit stability.

After stabilizing the weakest soil zones, additional injections realigned the pads within the 3/4” tolerance for the ice chillers to function properly without damaging each unit.