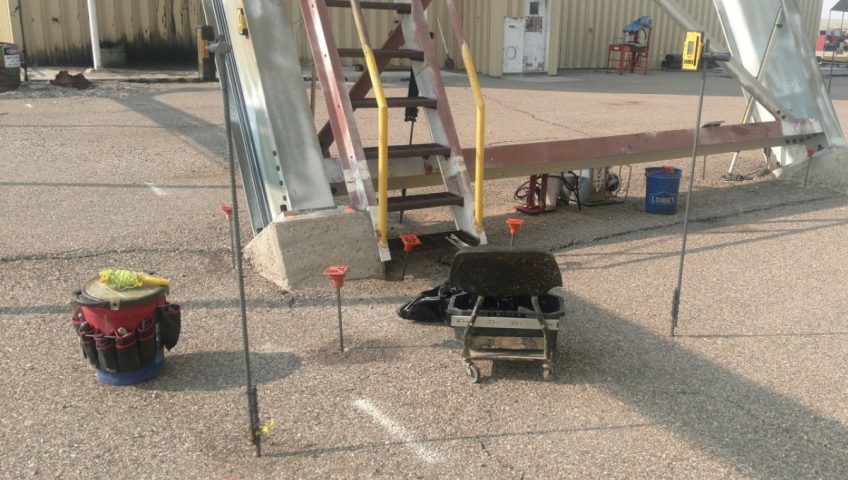 The head frame support leg foundation on one of the Tronox Alkali Corporation mine shafts had experienced settlement. As a result, movement of the footings had caused the head frame and shaft bucket to shift from center. The issue was discovered as crews and equipment were being lowered and retrieved from the mine shaft.

Tronox Mine Foreman Todd Jackson contacted John Eddins, P.E. with JFC Engineers and Surveyors to investigate the problem. The goal was to find a solution that would effectively align the shaft and mitigate the issue of potential future tilt or settlement.

Stabilizing the foundation of the head frame support and correcting the tilt to safely allow mine crews to use the equipment to access the mine shaft was critical.

JFC Engineers contacted CST to help deter-mine the best solution to stabilize and realign the structure.

CST partnered with JFC Engineers and performed a thorough site investigation. It was determined that the back leg of the head frame foundation would be treated using the Uretek Technologies to stabilize, lift, and realign the structure.

Dynamic Cone Penetrometer tests were performed to determine the condition of soils below the frame’s legs. The tests and analysis revealed that the soil would need to be treated at two depths to lift and to stabilize the soils to assure no future settlement would occur. Injections were made at two depths under the foundation and at the toe of the foundation to mitigate potential slide or settlement in the soils. The treatment was to obtain the target realignment of the structure and the foundation stabilization with minimal disruption to the structure or operations.

Injection probes were placed through the asphalt and into the soils at depth. Injections were made while closely monitoring elevations for movement.

The mine shaft footer foundation was stabilized and the shaft frame vertically realigned. Due to the surgical precision of the injection process, no additional stress to the structure or horizontal movement occurred during the lift. Voids were eliminated beneath the footings, ensuring a strong and stable base to support the heavy load.

The project was completed with minimal disruption and without having to take the equipment off line during the repair. The equipment was immediately put back into use with all repairs done in only two shifts. Most importantly, stability was restored quickly and efficiently, extending the safe use-life of this industrial structure.

“The project was well planned and executed. The back leg foundations were lifted to the established target elevations which brought the head frame structure to verti-cal plumb. The client expressed their ap-preciation and satisfaction with the results” -John Eddins, P.E., JFC Engineers & Surveyors

CHALLENGES
Stabilize the soil beneath this large piece of equipment without having to take the shaft offline or deconstruct the head frame.
Correct the tilt of the head frame to bring the shaft bucket operation back to center.”