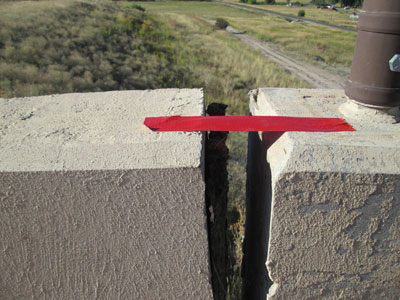 In Castle Rock, CO, along the Crystal Valley Parkway, the Town of Castle Rock, CO was experiencing bridge approach slab settlement of 1,900 SF of bridge approach, departure, and sleeper slabs on two bridge ends and adjoining pavement. Settlement of adjacent sidewalk had also occurred causing an unsafe driving situation as well as dangerous conditions to pedestrians utilizing the crossover sidewalk area. The unstable subgrade reaching below the sleeper slab would need to be treated to stabilize the area before mill and fill of asphalt pavement could be performed.

CST partnered with the Town of Castle Rock, utilizing their Deep Injection process to treat unstable soil, lift the slabs, and realign sidewalk and pavement areas. Dynamic Cone Penetrometer soil tests were performed to correctly identify the weak soil zones. Injection tubes were placed at depth and expanding structural polymer injected to densify and provide stabilization of subgrade soils. Once the soil is stabilized, injections are continued to provide lift and realignment of the slabs and overlying pavement. The CST Deep Injection process provides proper support to the soil and heavy sleeper slabs to mitigate against future bridge approach slab settlement and movement, while also providing a solid subgrade for pavement.

Repairs were made in two shifts while allowing traffic to continue utilizing the area vs. time and money spent to reroute. Foundation soils were significantly strengthened to mitigate against future settlement. Bridge approach and departure slabs were lifted back to original elevation as well as stabilization and lift of sidewalk areas. Subgrade soils were quickly and effectively stabilized to provide a strong base for asphalt pavement mill and fill operations. The added benefit of water cutoff effectively arrests soil erosion within the area. Significant savings to municipalities and tax payers vs. alternative methods of rip out and replace. Extended use life of the bridge, sidewalk, and pavement.